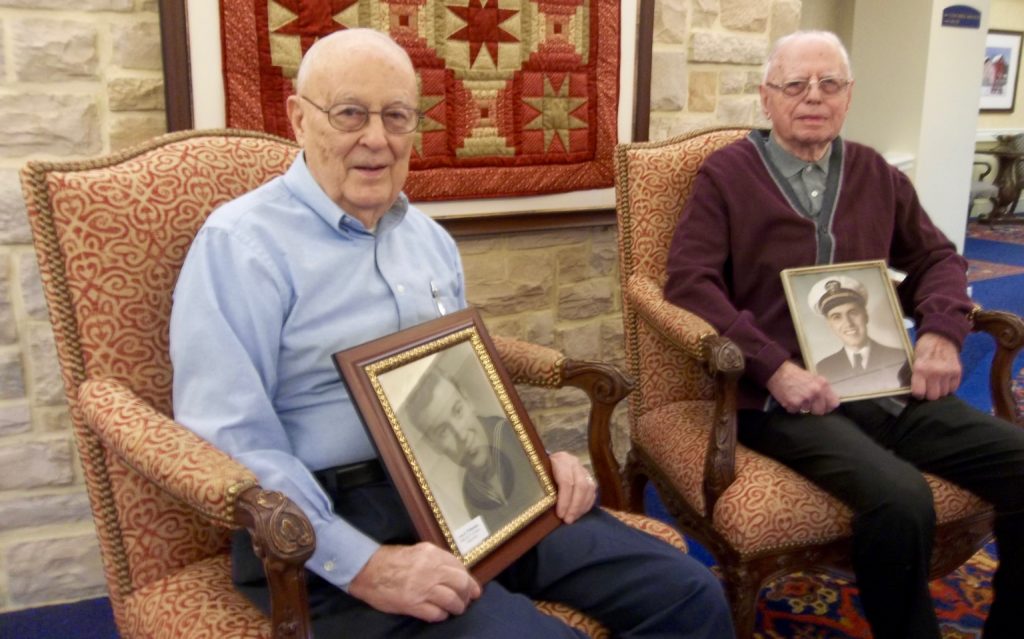 Two Residents at Brethren Village Retirement Community were the key sleuths in bringing joy to a family 300 miles away whom they had never met. You might call this “The Case of the Lost Testament.”

Nick Carthage, now 96, was a lieutenant and pilot in the United States Navy in 1944, based at the Naval Training Station (Aviation Maintenance) in Pensacola, Florida. Sailors would customarily stay at the station for a few weeks and leave when training was completed.

While there, Nick found a New Testament in a drawer, obviously left behind by a previous trainee. The Testament’s distinct and personal features conveyed its importance to the owner. The small book with a steel cover was meant to be carried in the left shirt pocket to protect a soldier’s heart during battle.

The cover bore the words, “May this keep you safe from harm.” In the front of the Testament was the inscription, “Presented to Edwin Vaughan, From Mother and Daddy.”

Nick tucked it away, planning to somehow find the owner, and soon finished his training in Pensacola. A war was going on, and Nick was part of the Navy’s hurricane-hunting air crew, tracking weather patterns over the ocean. Upon Nick’s discharge, the Testament remained packed away somewhere, never surfacing until he moved to an independent living community at Brethren Village in 2011. Though Nick didn’t bring all his possessions to his new home in Fieldcrest, he did bring the Testament. He wasn’t about to part with it so easily after 67 years.

Last year, Nick asked a Brethren Village concierge if she knew who might be able to help him find the owner of the Testament. She immediately thought of Leon Whiteman’s love of genealogy research and got in touch with him. Coincidentally, Leon was also in the U.S. Navy during World War II as a Pharmacist’s Mate, Second Class, and was eager to take on the challenge.

Through Leon’s online research, mostly on Ancestry.com, he discovered six soldiers with the name of Edwin Vaughan who served in the military during World War II. Before long, Leon was able to zero in on Edwin Vaughan from the small town of Victoria in southern Virginia.

Leon read that Edwin died in 2000, so he contacted the funeral home that handled his service. The funeral director notified Edwin’s daughter, Carolyn Lewis, who called Leon. She was surprised and delighted to hear that a long-lost possession belonging to her father had been found.

Leon mailed Carolyn the Testament, which she received around Thanksgiving in 2017. Carolyn, her mother, Mary Beth Vaughan; and sisters, Pam and Charlotte were overjoyed to receive the Testament after its prolonged absence.

“I cannot express how thankful we are to receive this precious treasure. We do appreciate so much that the man who found it kept it safe all these years,” said Carolyn. “I want to give my heartfelt thanks to Leon for his efforts to find us. As this piece of heritage gets passed down through generations, you can bet this story will be too.”

Nick and Leon, both Fieldcrest Residents with wives residing in The Courtyards, were glad to help in returning the Testament to Edwin Vaughan’s family.

Nick agreed with Leon, who said, “I am thrilled to have a part in finding the rightful owners of this valuable New Testament. After over 73 years, the mystery has been solved.”